THE RACE BETWEEN DEPRESSION and TECHNOLOGY
0 0 0 0

Home » Insights » THE RACE BETWEEN DEPRESSION and TECHNOLOGY

The post-Covid landscape will be reminiscent of the end of a World War.

As World Wars go the cost of 2-3 million dead and over 100 million affected is certainly low but the overall damage is done to Society and the Economy is much bigger.

The cost to Society estimated great and long-lasting, is yet to be calculated.
The cost to the Economy is already very difficult to bear.

To face up to the pandemic all States went deeper into debt with the total debt of the World equal to 365% of GDP and rising even more steeply since the pandemic.
This mountain of cash is very far from representing equivalent values. Historically a debasement of currency will follow.
When the ratio of National Debt to GDP exceeds 100%, real GDP growth is doubtful.

With the paralysis of production and consumption due to Covid, a lot of companies and individuals will go under.

Only China up to now has recovered to a significant degree and this will create a new geo-economics’ imbalance with Geopolitical consequences. 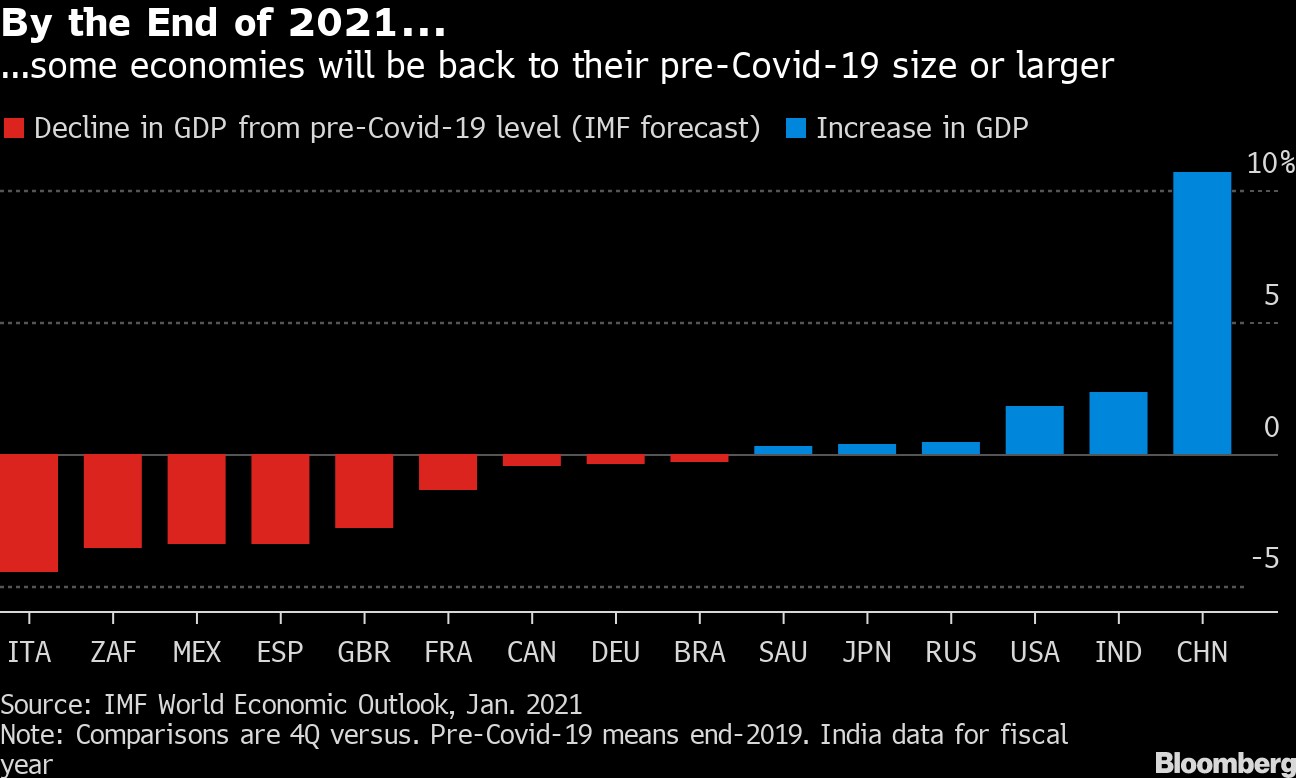 A very deep crisis is looming in a few months or years.

To counter this, Wealth generation is needed.

That Wealth is already being created by the change in the Energy Sources model and the Digital Explosion.

The risks
The first risk is Political.
The issue is how fast the United States and the rest of the West will recover from the Trump era and the pandemic damage and the Worldwide repercussions of recent events, particularly China’s perception of them.

The second risk is for Covid to prove more resistant and for general immunity to take longer.
No significant improvement can be expected before 2021 in any case. Caution will rule.
In the best case Socially and Economically, matters will not improve before 4Q 2020

Some examples:
The World Bank indicated that many Countries are potential financial defaulters. Brazil, one of the most dynamic World Economies before being bankrupt, is a case in point.
A million or more small businesses Worldwide will have difficulties restarting.

The Association for Financial Markets in Europe said in a report that: “Companies face an equity shortfall of as much as 600 billion euros ($724 billion), as existing government programs and private funding won’t suffice to fully cover the roughly 1 trillion euros that businesses need to replace losses suffered during coronavirus restrictions”.

Consumption will improve but will not skyrocket, the scars are still deep.
The Worldwide disruption of the Supply Chain will not improve fast.

All the last decade, credit generation was superseded by much value generation.
All the Central Banks generated credit to States, banks, corporations, and even individuals with one purpose only. To avoid Economic collapse. They have succeeded in this by deferring the cost to the future.

It should be noted that the Stock Exchanges are divorced from reality and not only do not reflect the present dire straits of the World Economy but they carry on rising.

It is simple.
With credit available almost at zero rates Companies issue bonds and then buy their own stocks.
Companies also take loans to give dividends to their shareholders.

The following graph is self-explanatory.

Obviously, this type of Virtual Economy cannot go on forever.
It is a paradox that M1 speed increased 60% with no inflation.
It is interesting to note that many Companies making losses have their stock price rising continuously.
It is also interesting to note that bonds that are expected to fail at a rate of 9% p.a. but give only 4.5% interest rate p.a.

According to Cogan: The Fed’s current QE-Infinity plan is running at $120 billion a month, which equates to $1.44 trillion a year.
If the Fed wants to keep long-term interest rates pegged at the floor while the Treasury issues another $4 or $5 trillion of debt in FY 2021, which is about 20% or more of GDP, they are going to have to monetize a whole lot more than $1.44 trillion.
It’s impossible to know how much more but, more than double the current pace is likely.

If stocks ever drop 10% again, they’ll have their excuse to do it.

The future failure of all those Companies is certain unless something new generates wealth inside them to fill the gap, or outside them to replace them.

If the gap between available money and generated values is not bridged, if price and value do not match, then total economic collapse in the future is certain.

The opportunities
A lot of new Technologies, maturing simultaneously, give hope that the looming Depression can be avoided or be of short duration.

Energy
The most important one is the Energy Revolution.
For the first time in History, States can become self-sufficient in Energy, even if they do not have fossil fuel deposits.
Energy is a principal Geopolitical factor and historically Energy is the greatest catalyst for Prosperity and Social Change.

With the end of the Napoleonic wars, the Industrial Revolution developed using coal to multiply human and animal muscle power through steam. It was the greatest Wealth creator of all times until then.
With the end of the 1st WW Oil was permanently introduced and resulted in the development of the Internal Combustion Engine.

With the end of the 2nd WW Oil became the prime source of Quality Energy and transportability was multiplied many times resulting in the engagement of many more National Economies in the unprecedented Wealth creation that marked the second half of the 20th Century.

The end of the Covid war will mark the development of a new source: Renewable Energy.
The Energy demand can only increase. 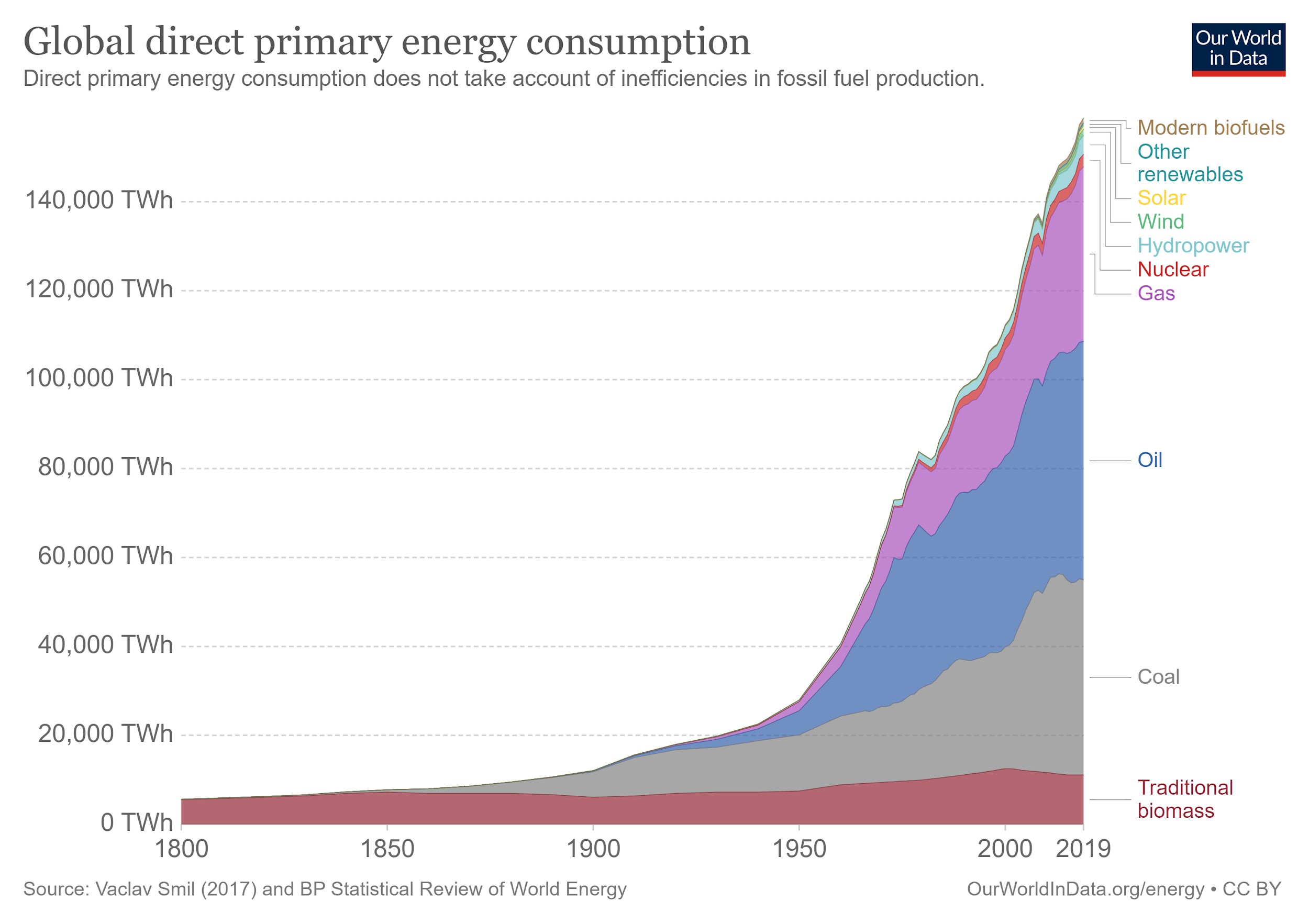 As an example, the bitcoin network in 2020 consumes 120 gigawatts (GW) per second. This converts to about 63 terawatt-hours (TWh) per year, about 1% of the world’s energy consumption.

It is obvious that if we do not want to boil ourselves or choke in our exhaust gases, renewables are the only possible solution. 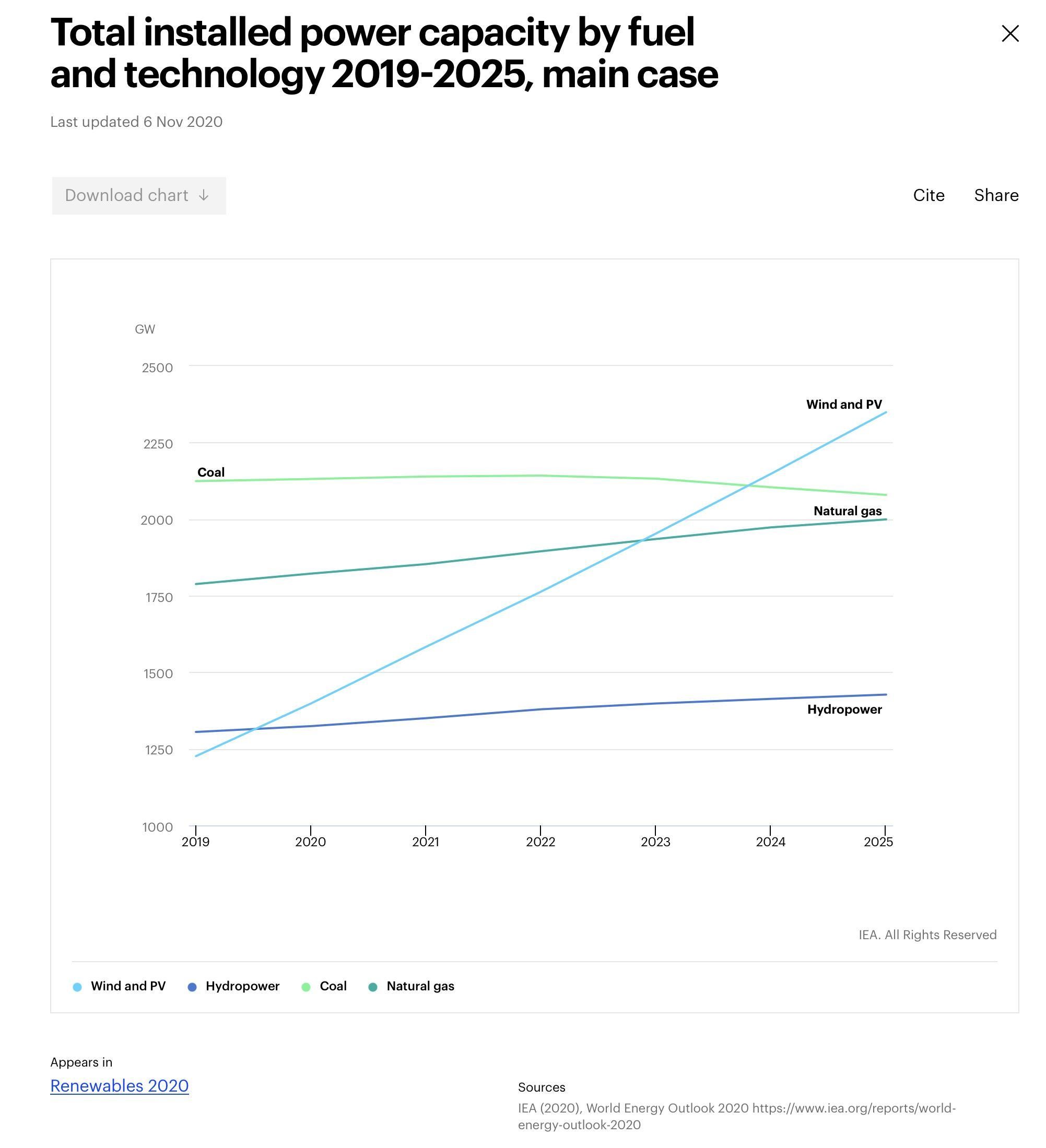 The graph above shows the growth of renewables in Electricity production. It is similar in the rest of the Energy consuming sectors.

The share of renewables in the US exceeded that of coal in Electricity generation for 153 days compared with 39 days in 2019.

AI
The next source of Wealth, that is already developing, is Knowledge generation.

The new Cognition Revolution will be producing amazing Wealth through the creation of Knowledge systems like for example AI applications products, whose value will exceed by much the present software products value.

AI at present is a newborn baby but growing exponentially. At present and in the near future it can help in the quality automation of physical work, automate most desk functions and assist intellectually.
It is not a magic wand and high knowledge, training, and skill is required for its successful deployment.

It is an excellent new tool and AI applications are high-value products.
An example is that today we process only 10% of the Data collected at the edge. By 2025 this will rise to 75%. Companies will become deeply knowledgeable about everything that concerns them.

McKinsey’s latest forecast of AI’s impact on the global economy is that it will have generated $13 trillion in economic activity across the world by 2030, despite causing upheaval for many people.
The company expects AI will add about 1.2% of additional GDP growth per year through to 2030, which is much higher than the steam engine’s boost to human productivity of 0.3% per year between 1850 and 1910, and twice the impact IT had in the 2000s.

The above graph is already superseded and the rate of market increase is already steeper.

The New Technology Mixes
There is a simultaneous maturing of technologies that combined are a great value multiplier.

Those are 5G, IoT, EV transport, 3D printing, Digital Sciences, and others that lead to Advanced High-Value Manufacturing automation in the office and Government the ability to tele-manage an automated production process where the product is designed in one place and is automatically produced in another

The value created by those technologies is much higher than what has been achieved up to now.
It is the only way that the gap between credit and value can be bridged and the great World Debt managed.

Conclusion
Governments borrowing for free will not last forever and, when conditions normalize inflation will return with a vengeance.
There is no doubt that in the medium term, the New Energy and Technologies opportunities will outweigh the risks.

The question is if they will develop fast enough to assuage the great bubble crisis now forming.