Home » Insights » CHALLENGES START AT THE END OF THE PANDEMIC

The need to face the immediate threat of the pandemic covers temporarily the collateral damage that this Coronavirus is causing, hiding the problems that lie ahead when this pandemic will be brought under control.

We are about to face the mother of recessions.

The emerging challenges are already apparent.

The damage will persist for years to come.

There is a mass of articles, opinions, and forecasts on how everything is going to be after the pandemic ends.

Instead of conjecture on how everything is going to be, it is preferable to focus futurology on the five major issues on which we have enough indications to forecast, with reasonable probability, the transformations to come.
Those are:

A total of 81% of the global workforce of 3.3 billion people have had their workplace fully or partly closed.

In the US, in the first three weeks of the pandemic,17 million employees became jobless. It is a guess how much it will go up for an unknown period.

With 25 percent of US households living from paycheck to paycheck and 40 percent of Americans unable to cover an unexpected expense of $400 without borrowing, unemployment will make them desperate.

The U.S. Surgeon General has underlined that the coronavirus is disproportionately infecting and killing black people. For example, New Orleans’s death rate is double NYC’s.

The Social Consequences of a combination of the above may be not containable.

Similar alarming stories are taking place around the World.

In the “developing” Countries, the combination of the public health and economic blow with the lack of a social-net will be devastating.

India, the Middle East, and Latin America are or are becoming socially unstable.

Where, like in Europe, a social safety net exists, the budgetary strain and the measures that need to be taken are splitting the European Union apart.

Francesco Rocca, head of the International Federation of Red Cross and Red Crescent Societies (IFRC) told a United Nations news briefing: “In the most difficult neighborhoods of the biggest cities, I am afraid that in a few weeks we will have social problems. “This is a social bomb that can explode at any moment because they don’t have any way to have an income.”

The pandemic combined with unemployment will stoke anger and wrath further.

If unchecked it will become a tsunami.

The combination of the built-in fragility of the international financial system after a decade of artificial, QE based, financial growth with the Energy crisis and now the pandemic is enough to ensure that that the damages will affect all of this year and the after-effects will last at least all the next one.

It is naive to believe that, with factories closing globally, horrific cash flow numbers, Companies going bankrupt in unprecedented numbers, the Global Supply Chain receiving a second debilitating blow after the Trade Wars, unemployment rising dramatically, demand dropping alarmingly and nations antagonizing each other in most fields, there will be a “V-turn” or even a “U-turn” in the global Economy. An “L-turn” is more likely.

Indicative of the worsening climate, one-third of U.S. apartment renters did not pay any April rent in the first week of the month.

That will also happen around most of the World.

There is already a severe recession in Germany and France and other European countries such as Italy and Spain, where there is an even worse economic fallout.

Germany’s economy, the economic locomotive of Europe, is forecasted now to shrink by 4.2% this year. That will become worse, although already it is the sharpest decline since record-keeping began in 1970, double or more of the 2008 recession.

The situation in other parts of the World is equally dire.

Many Latin America’s Countries economy that was already going backward when the coronavirus hit, is now going to collapse. 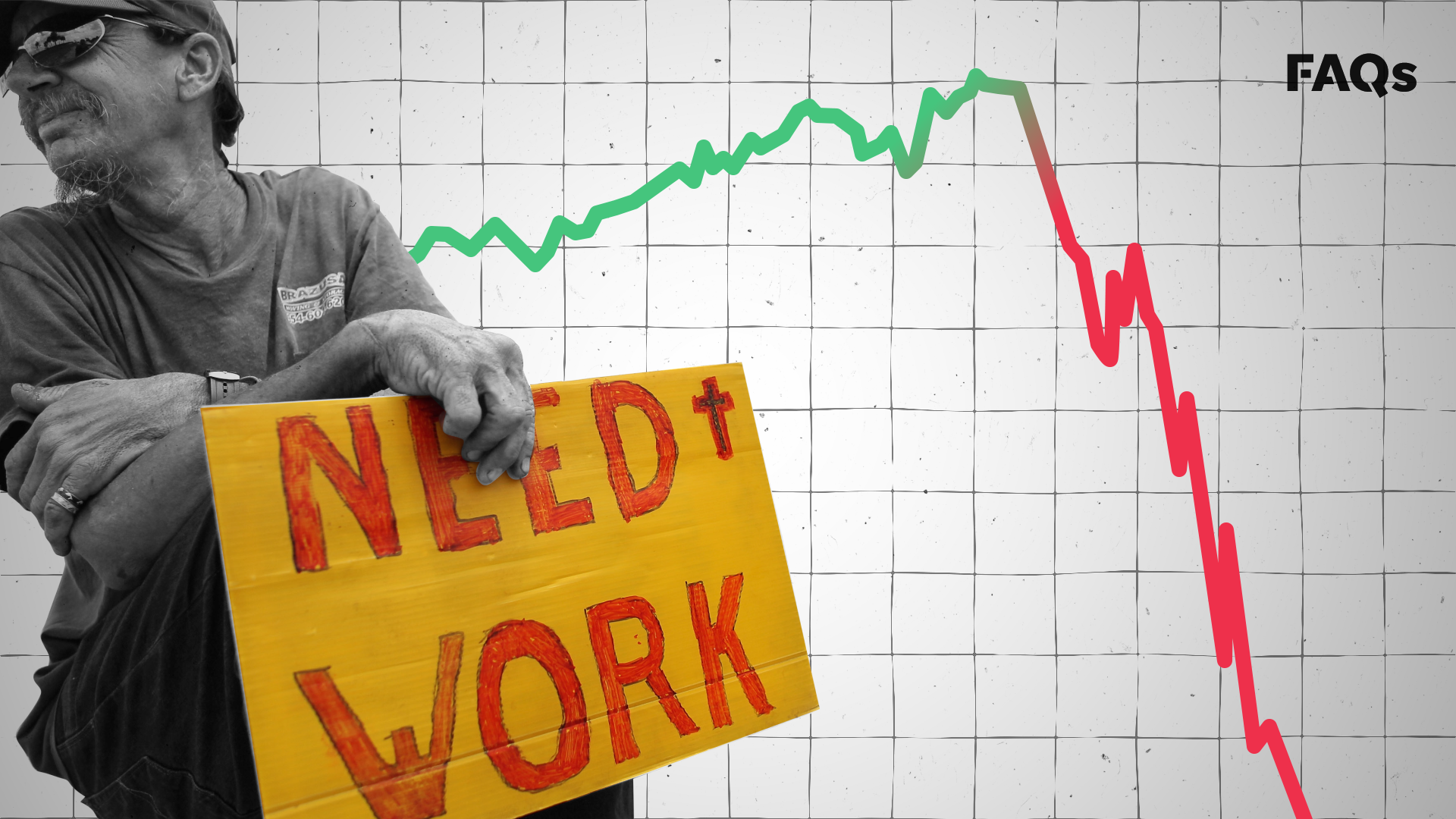 Other weakened Economies like South Africa, Pakistan, Bangladesh, etc. are ready to go under.

In Turkey, for example, the lira has depreciated over 15 % against the U.S. dollar in the last three months, putting further strain on Turkey’s overleveraged nonfinancial companies that have foreign exchange liabilities totaling some $300 billion of which one-third in short-term loans that are to be refinanced in the coming trimester in a weakened and hostile market.

But even in the big Economies, pouring in money temporarily does ease living conditions and props a big number of Corporations about to go belly up, like Boeing, but does not create profits or value and -at least theoretically- loans must sometime be paid back. (?)

The only Country that has the discipline and the ability to exit the recession because of its big internal market also, is China and on a smaller scale, South Korea and possibly Taiwan.

The Global Economy is in a historic shakedown that cannot and will not be corrected by the usual tools since both production and consumption will dramatically change, transform and reshape.

There is an unprecedented drop in Energy demand.

Oil and Gas represent 60% of the World’s Energy.

Something unthinkable three months ago is happening. The bottom fell out on the price of Oil by design.

The Russians refused to continue production cuts. The Saudis called their bluff.

The damage is done to the US Oil industry that became the last year a next exporter and was pushing the market share of everybody else.

The above, combined with the great demand drop caused by the Coronavirus created such a surplus of Oil that it needed dramatic cuts by everybody involved to stop the price dive.

The normal World Oil demand is about 100 million BPD. The demand now is estimated at 65 million BPD.

This represents the total sum of production of the USA, Saudi Arabia, and Russia together.

With 28 million BPD of oversupply in the oil market in April and 21 million BPD in May, the globally coordinated production cuts that are needed may exceed the cuts that will be agreed, which anyway will not fully adhere to.

The Oil price wars demonstrated that there is much more Oil available than the market can take, at 50$ per barrel. 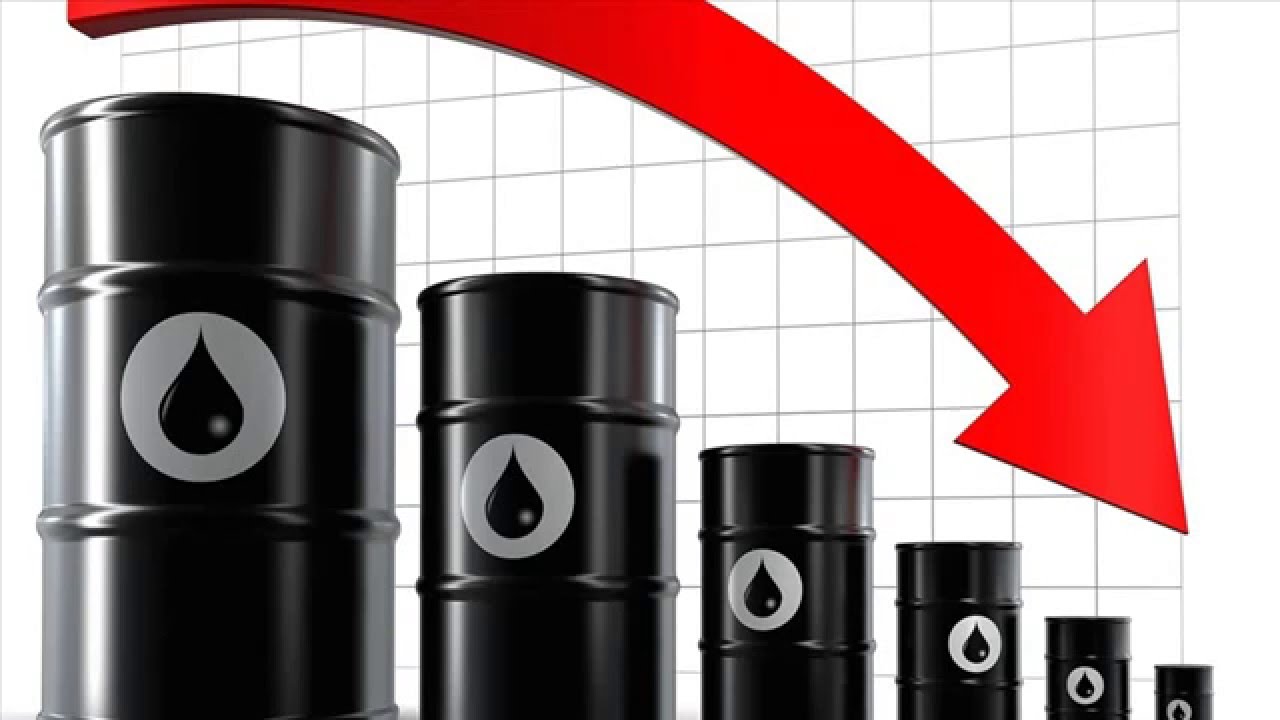 At a pegged price of 35$ per barrel, a lot of Oil-producing Countries will go bankrupt.

No new investments are likely in the Oil industry.

Exxon Mobil Corp in the first three months of this year throttled back investment in shale, natural gas, and Deepwater Oil production, cutting planned capital spending by 30% this year as the coronavirus pandemic saps energy demand and oil prices tumble.

Oil companies have pulled back 2020 spending plans by an average of 22%.

More cuts will come as the credit and bond ratings of Oil companies deteriorates.

Nobody will invest in an industry that cannot guarantee medium-term investment returns.

The Energy source on which the whole World based its prosperity for 70 years is about to undergo an existential crisis.

It is obvious that the World cannot base its future prosperity on the Geopolitical games that States play.

Renewables will provide both Security of Supply and Financial Investment stability.

Europe’s green energy companies are emerging as a shelter for investors in market fallout from the coronavirus. 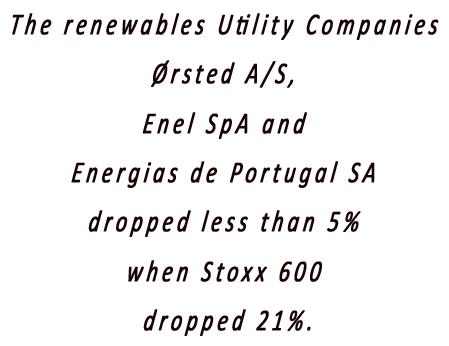 Green energy made up 72% of all new energy projects in 2019, and solar and wind made up 90% of those projects.

China is giving priority to the return of full production in the Solar panels industry. 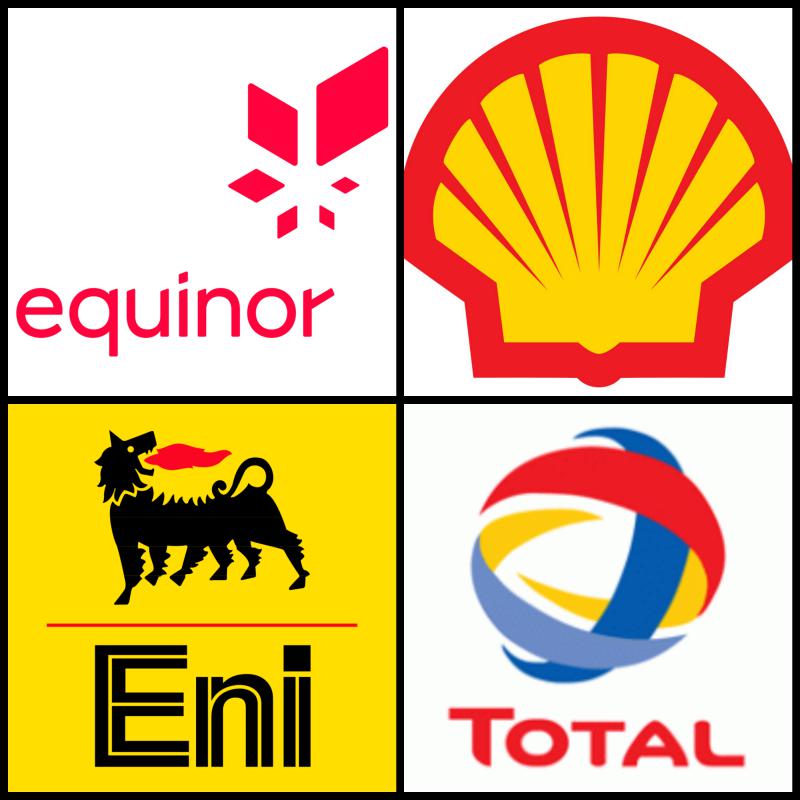 All four Companies are shifting their business from Oil to renewables.

Future Energy will come mainly from renewables. Possibly before 2030.

With the reduction of industrial activities due to Coronavirus, environmental pollution has been dramatically reduced and all societies understand how much healthier life will be when the environment is respected.

The rush will be to start production again and ignore pollution.

This will last only for a very short term.

Cooler Statesmen will realize that saving the environment will result both in saving lives and developing new, lucrative economic initiatives.

Circular Economy and Smart Cities will become the new norm.

That is also the direction for a World Economic Renaissance.

Simply there is none between the States. While the problem is global their action is parochial.

US and Chinese Governments took turns accusing each other–without a whiff of proof of having bioengineered the coronavirus pandemic.

Iranian and Russian media accused the US of this.

The US, due to the very inadequate presence of Trump in the Presidency, has lost the moral leadership of the World.

The Chinese are trying now to capitalize on this by extending their physical and financial presence Worldwide with only superficial efforts for international cooperation.

Europe has torn apart between North and South.

While half of the European leaders declare the “house on fire“, the other half wants to discuss the cost of “fire extinguishers“.

Russia considers that all this is a Geopolitical opportunity.

India is in a state of panic.

Latin America is preparing for a wave of the pandemic combined with the emergence of new dictators. 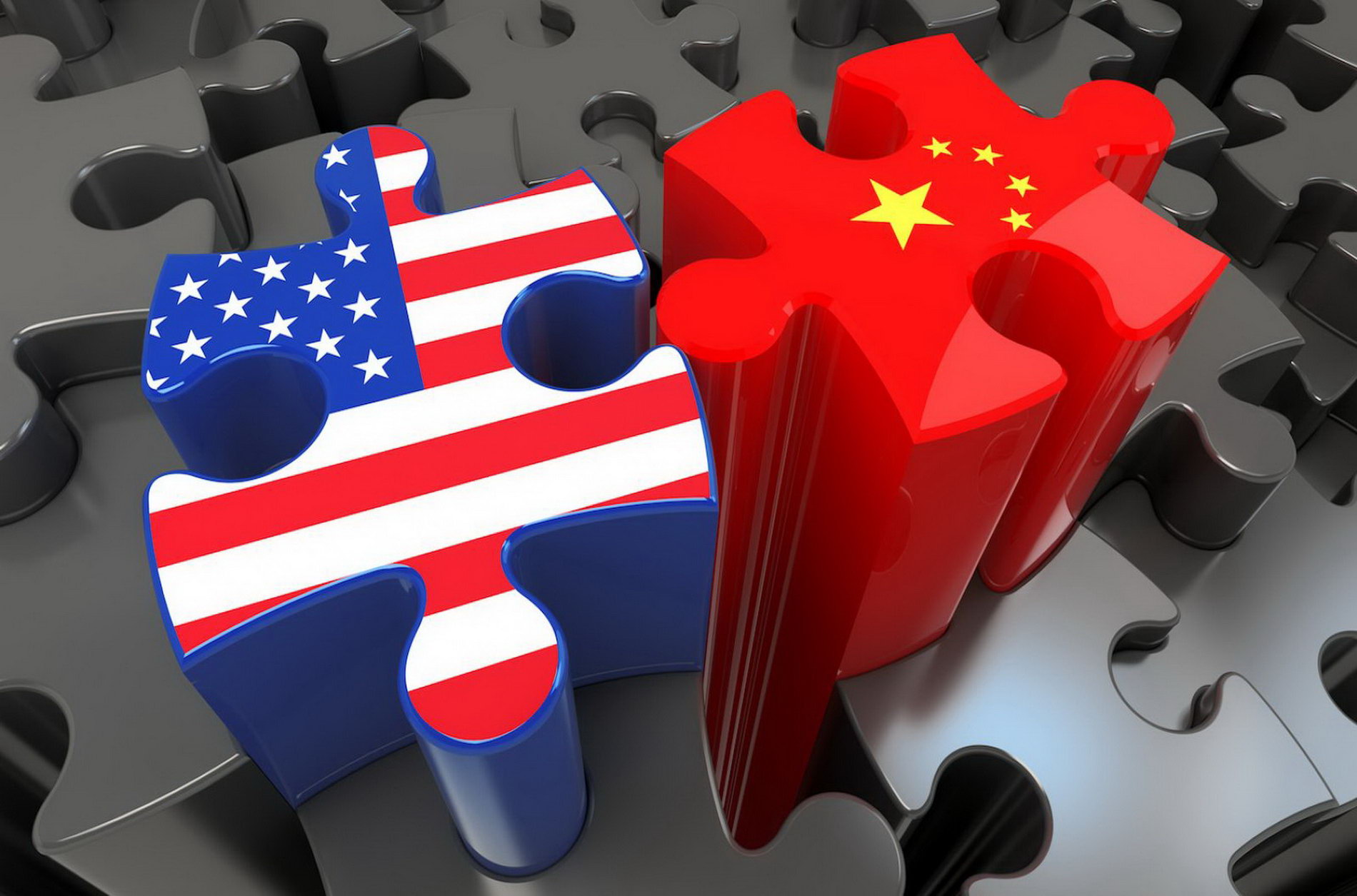 The big game will be played next year between China and the US.

Either a compromise will be reached in which China will limit its global ambitions in exchange for regional dominance or, the already hurt and bleeding, USA, will try to reestablish its world primacy.

In the second case, the pain will be global.