When you are a CEO, sycophancy is an occupational hazard.

Very few of us can fully avoid it, and as our bias is that we are undoubtedly right, any sycophant, flatterer and “Yes Man” finds fertile ground to cultivate our self-esteem.

There are few that will openly oppose us and fewer still those that will attempt to take us a peg or two down from our opinion of ourselves. Our self-importance grows with the job, particularly after a few successful years.

Power corrupts. The worst part of corruption is the internal corruption that is mostly done to the ego of the powerful. The French, observing the behavior of their Princes in medieval and later times called it the “illusion de grandeur”.

Although the modern CEO is not the same as a Medieval King, the CEO needs now and again a temporary grounding of his/her authority and this can be best achieved with humor.

The Medieval Kings, considered to be God’s anointed choice as Rulers, understood that someone, somehow, must be able to tell them some truths without a challenge to their Authority.

In Shakespearean plays, the “fool” is the most insightful and intelligent man of the play. 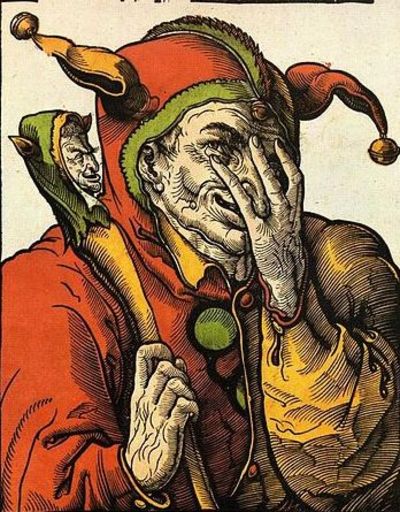 He has a license to speak truth to power with no holds barred – in a context where no-one else dares.

He is usually the wisest character of the play. The other characters refer to him as “the fool”.

As Isaac Asimov observed: “That is the great secret of the successful fool – that he is no fool at all”.

The modern “fool” must be someone outside the power structure of the Company but very close to it and not necessarily a member of the Company. Anyone, bright enough, independently minded and disrespectful of authority, is suitable. The “fool” must also have an excellent sense of timing.

The Romans, were quite knowledgeable on the collateral damage of Power. Every time a victorious General was granted a Triumph, which was to majestically parade with his Army, prisoners and loot through the streets of Rome, full of admiring Citizens, the following would take place:

They would place in the same triumphal chariot with the General, a slave who would whisper continuously to the General’s ear – “Remember that you are mortal”.

CEOs to survive must build their own myth.

The danger comes when they believe it themselves.

They must find someone to keep them grounded.

It takes a courageous Leader to search and find his/her fool.

But a Leader, before conquering others must first conquer the Self.